This is a listing of 1 input audio interfaces

These 1 input audio interfaces are ideal for personal use (there is only 1 input, duh…). It’s obvious you cannot record more than one instrument (source) at a time.

The interfaces especially designed for use with a MAC computer function very well. I have an Apogee Jam and an IK Multimedia Irig HD. Both work without a glitch in a MAC and provide good audio quality and (very) low latency. Some interfaces offer only an input and no output (like the Apogee Jam and the IK Multimedia iRig HD). The default output socket of your Mac used as output in that case.  For use with some software packages (Native Instruments Guitar Rig) you have to create an aggregated device, combining the interface and the default audio out into one device. This sounds more complicated than it is. Tutorial will follow.

Please note that when I say “guitar” or “instrument input” I also refer to bass guitar.

You should NOT buy a 1 input audio interface if:

Mac ONLY! No problems to report. Works very well. Works also with an Ipad or Iphone (the right cables are included). NO SOFTWARE included. You will have to use Garageband or a third party app like Guitar Rig or Amplitube. Only input and no output, you have to use the default internal audio out socket.

There is now a 96k/24bit version of the Apogee Jam that is supposedly better, the Apogee Jam 96k. 24 bit is nice, but I honestly don’t see the advantage of 96k. It comes at a heftier price that puts it in direct competition with 2 channel interfaces: 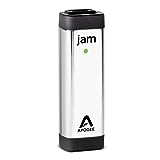 At the start Mac only, but they have a workaround so you can use it on Windows too (I don’t like fumbling with workarounds). Just as the Apogee Jam iOS (iPad, iPhone) compatible (cables included). Only input and no output, you have to use the default internal audio out socket. All iRig interfaces come with a free software suite from iK Multimedia: amp sims, romper (Sampletank) etc…Note that these free versions are “light” versions and that iK Multimedia will try to up-sell you more amp models and sounds…

Cross platform Mac and PC. Includes the rather good (but not the best in my opinion) amp simulation software Pod Farm. The use of their own driver/ software combo results in nice low latency. Inputs AND outputs. Stereo output is a tiny 1/8 inch jack for headphones or line out.

1 input interfaces for other sources than guitar.

Being a guitarist I tend to forget about singers and acoustic instruments like the piano.

MAC ONLY! Has an instrument input AND an incorporated microphone (so technically not a 1 input audio interface). Opinions are generally positive. But boy, is it expensive. Ipad and iPhone compatible though.

Another not really “1 input” interface. Basically the same interface as the iRig HD but with an XLR microphone input (with phantom power!) and a midi jack. Not bad for such a small interface. You can NOT use the guitar input and microphone input at the same time. If you need this you should look at 2 channel audio interfaces. Again: Mac “only”, if you don’t take in account the “workaround”. Also iPad and iPhone compatible. The leads to connect to the different devices are included.

It’s clear this is not a big list and neither is it complete.

Choices will be a lot broader if you climb up the ladder just a bit with the 2 input audio interfaces. The next stage in audio interfaces is only slightly more expensive, so this is not the place to save a few bucks. The Line 6 Pod Studio will equally work well on both platforms, although on PC it’s always a “hit and miss” story. This usually is not dependent on the audio interface, but some Windows PC’s are simply not fit for audio work (read up on DPC Latency).

This concludes this article on 1 input audio interfaces. I will update according to changes in the field. If you want to stay informed, please subscribe to the newsletter at the bottom of this page. You can also leave a comment if you wish. Thank you for reading!

Replace this widget content by going to Appearance / Widgets and dragging widgets into this widget area.

To remove or choose the number of footer widgets, go to Appearance / Customize / Layout / Footer Widgets.